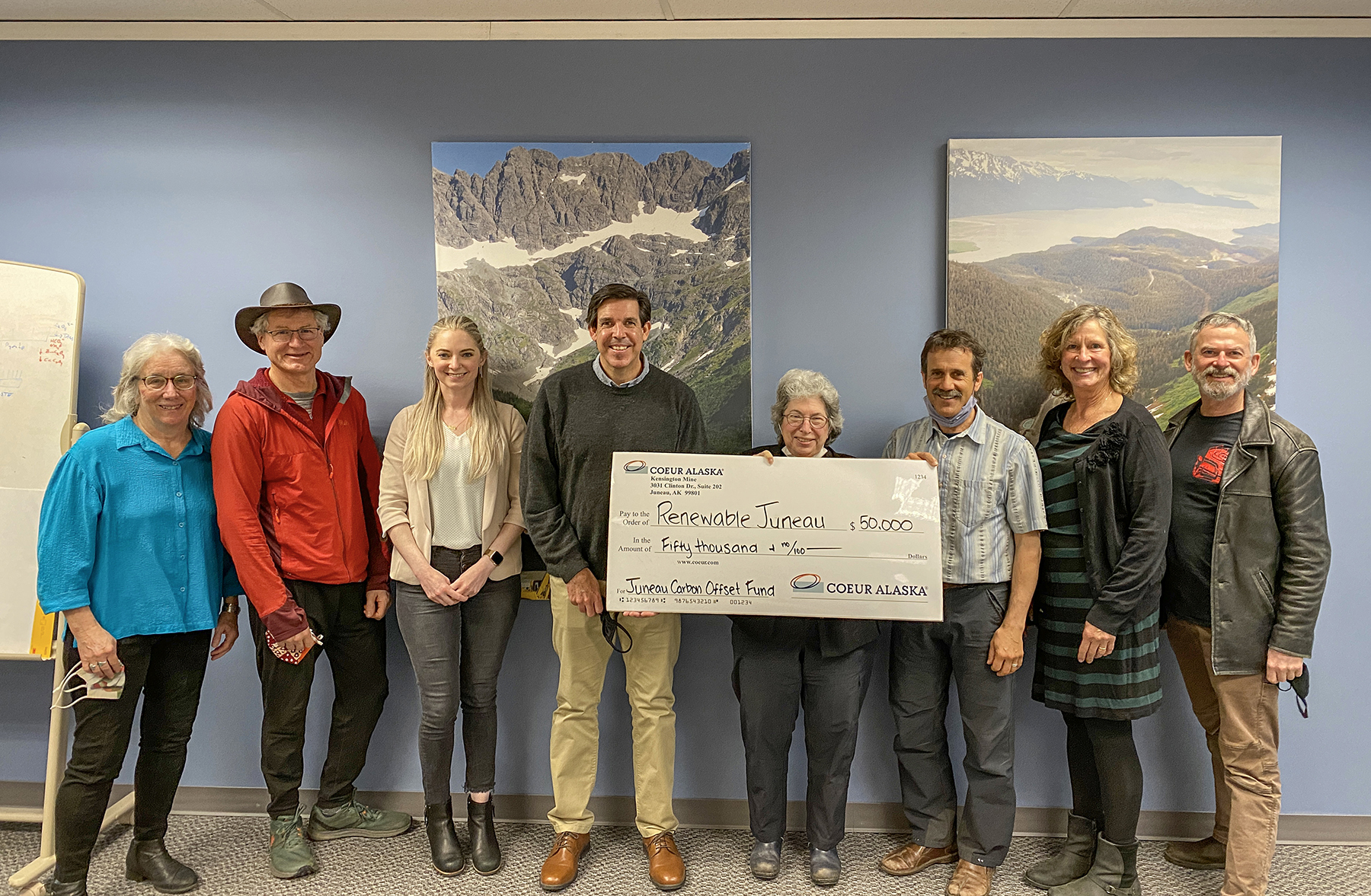 The Renewable Juneau board of directors is thrilled to announce that Coeur Alaska has re-upped its carbon offset commitment for 2022! Coeur Alaska paid Renewable Juneau’s Carbon Offset Fund (JCOF) $50,000 to offset diesel emissions from both its crew transport vessel as well as some of the facility’s numerous on-site pickup trucks.

Coeur Alaska’s 2022 carbon offsetting is a two-part commitment. $39,606 will offset marine vessel crew transportation emissions and $10,394 will offset diesel used in 42 on-site pickup trucks. Together, the sum represents Coeur Alaska taking responsibility for more than 1670 tons of carbon dioxide production. For comparison, 1670 tons of carbon dioxide is produced by 334 20mpg cars driving 10,000 miles each over one year.

A crew boat runs twice per day transporting employees and contractors to and from the mine site. The boat generally leaves from Yankee Cove, but occasionally departs from Echo Cove in the winter if there’s inclement weather. On average, approximately 65 people ride the boat per day, or around 2,000 per month. In 2021 the crew boats used a total 117,876 gallons of diesel.

42 on-site small pickups roughly burn an average of 88/gallons a day in total. This annual volume of diesel is 32,120 gallons.

Last year, Coeur Alaska added a $17,000 donation to Renewable Juneau to assist our efforts to internationally certify the JCOF. JCOF has explored becoming a certified carbon offset project since the Fund’s creation in 2019. The cost has been prohibitive for Renewable Juneau, a non-profit staffed completely by volunteers. All work required to operate the Fund is unpaid and volunteer. This lack of administrative overhead allows nearly 100% of all carbon-eliminating offset purchases and donations to reach lower income families. We are excited to share that our initial application is under review at VERRA. According to VERRA’s website, “Verra is a global leader helping to tackle the world’s most intractable environmental and social challenges by developing and managing standards that help the private sector, countries, and civil society achieve ambitious sustainable development and climate action goals.”

Certification will add international credibility to the offsets and is essentially a third-party ‘thumbs up’. Certification will provide assurance to offsetting individuals and businesses that offsets are accurate, additional, provide a positive environmental impact, and are permanent. Certification can draw larger corporate donors who seek verified carbon offset services. And, certification may allow larger global offset companies, such as Carbonfund, TerraPass, or Wren, to market our program via their programs. In short, certification should allow the Fund to reach many more Juneau families in need and possibly others across southeast Alaska.