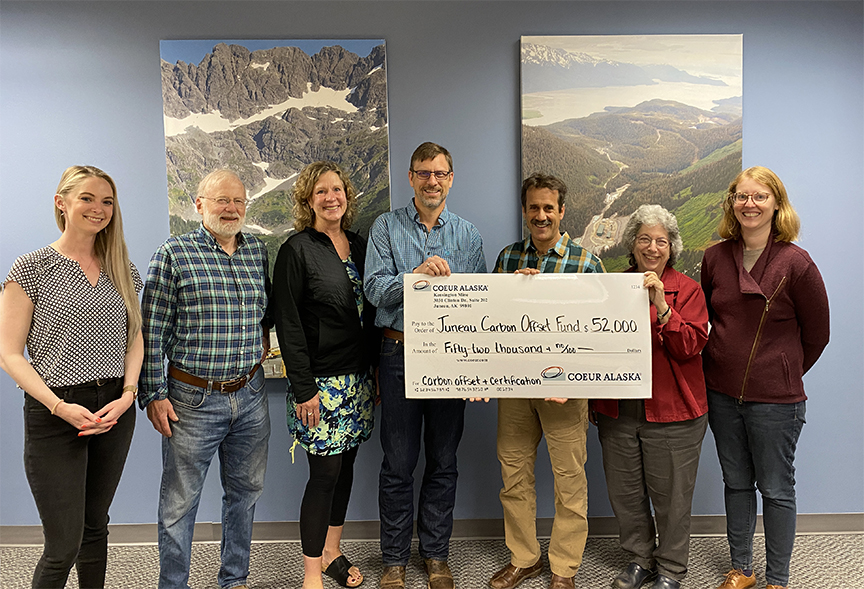 The many busy volunteers dedicated to the mission of the Juneau Carbon Offset Fund consider this new partnership a birthday gift – JCOF turns two on June 28! Two years, nearly $175,000 raised, twenty-one lower income families served, more than 10,500 annual gallons of diesel fuel no longer needed. The offsetting by Coeur will allow JCOF to reach an additional seven families and eliminate an additional minimum of 3500 gallons of diesel annually.

A crew boat runs twice per day transporting employees and contractors to and from the mine site. The boat generally leaves from Yankee Cove, but occasionally departs from Echo Cove in the winter if there’s inclement weather. On average, approximately 65 people ride the boat per day, or around 2,000 per month. In 2020 the crew boats used a total 104,561 gallons of diesel.

“When we learned about the Juneau Carbon Offset Fund, we were excited to partner with Renewable Juneau to help the community reduce emissions,” said Mark Kiessling, General Manager of the Kensington Mine. “We have over 34 years in the community working with our neighbors to protect our health and the environment and look forward to the impact we can make through this initiative.”

JCOF has explored becoming a certified carbon offset project since its beginning. The cost has been prohibitive for the nonprofit, staffed completely by volunteers. The lack of staff and overhead allows nearly 100% of all carbon-eliminating offset purchases and donations to reach lower income families. To make certification a reality, Coeur Alaska donated an additional $17,000 for Renewable Juneau to pursue official carbon offset project status. Certification will add international credibility to the offsets and is essentially a third party ‘thumbs up’. It will also provide assurance that JCOF offsets are accurate, additional, provide a positive environmental impact, permanent, and are only claimed by a single entity. Certification can draw larger corporate donors who seek verified carbon credits. And, certification may allow larger global offset companies, such as Carbonfund, TerraPass, and Wren, to sell JCOF carbon credits. Renewable Juneau estimates that if all goes well, the certification process may take close to one year.

Where certification will be very beneficial advancement for the Fund, the Renewable Juneau board of directors and the JCOF Advisory Committee are proud the Fund’s success to date. Just this week, the Fund’s 21st heat pump is being installed, bringing the total quantity of yearly oil elimination to nearly 11,000 gallons. Roughly 60 family members are enjoying the benefits of clean, dry, hydro-powered heat, on top of the substantial annual cost savings. We have relied on best practices, the support of the Juneau Community Foundation, and plain old Juneau neighborly support, from local residents and businesses alike.